William J. Reilly’s law of Retail Gravitation is widely used in the determination of potential retail trade area. Below is the critical review of the law.

The Law of Retail Gravitation: Retailing is selling consumer goods in small quantities to the final consumers. These final consumers are attracted by a shopping center or town by the assortment of goods offered for sale and by the reputation of the center for quality and prices of products. The consumers are deterred from visiting a shopping center by the time and expense of reaching it.

The trade area may be thought of either:

(i) as the total area from which a town secures any considerable portion or the trade, or

(ii) as the area from which a town secures more than one half of the trade.

In the first sense trade areas overlap while in the second, they are mutually exclusive, The attraction of a center may be measured by the population of the town, the volume of sales or the square-footage on fashion goods stores. The time-and-expense factor may be represented by distance or time.

One study in the U.S.A. found that retailers secured relatively little trade from places more than five miles outside the town’s trade area. In 1929, W.J. Reilly formulated the Law of Retail Gravitation, in an attempt to determine the potential retail trade area.

The Law reads as follows :

Formula of the Law of Retail Gravitation

It is also known as “Reilly’s formula”. It is represented by the following formula :

Ba=Proportion of the trade from the intermediate city A

Bb = Proportion of trade attracted by city B

Pa = Population of city A

Pb = Population of city B

Da = Distance from intermediate town to A

Db = Distance from intermediate town to B

The following formula, however, derived from the Reilly’s formula has proven to be of more practical use than the original. 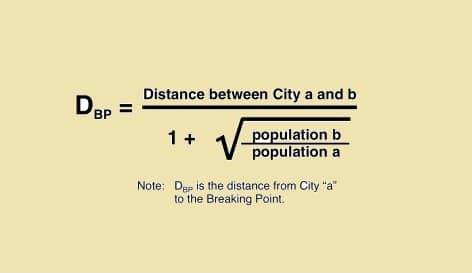 If a town A, for example, has a population of 120,000 and town B 30,000 and the distance between them is 60 miles, the breaking point or boundary of B’s trade area is 20 miles from B. The larger population of A means that its stores carry large assortment of shopping goods.

Hence, A is more attractive shopping center and has a trading area extending two-thirds of the distance to town B.

After considerable experimentation on the relative drawing power of rural retail trading areas in Texas and Illinois of U.S.A. this formula was developed to show the trade between two trading areas. The formula simply says that the people will normally be attracted to the nearest and largest shopping facility. These two factors may not always be compatible, since the nearest shopping area may not be the largest in the local area.The formula tries to adjust for this.

Basic Assumptions of the Law of Retail Gravitation

(1) Areas can be determined by this law with little or no field work.

(2) Distances are measured by the improved automobile highways.

(3) The Law refers to shopping goods.

(4) In bounding trade area of a town, the population is considered in relation to the population of competing towns and the distances separating them.

Do the Retailers Benefit by Knowing the Trade Area

10 Important Functions Of Wholesalers In Channel Of Distribution

How Does Marketing Improve Standard Of Living

What Are Shopping Goods With Examples

What Are Specialty Goods With Examples