The Concept of Consumer Surplus

Marshall explained that a consumer does not actually pay the maximum amount of money that he is willing to pay for the purchase of a commodity. For instance a consumer is willing to pay one dollar for a post-card when the letter is very scarce rather than go without it. But suppose the actual price of a post card in the market is only 15 cents.

The consumer is getting a surplus satisfaction of 0.85 cents, because the price he actually paid is 0-15 cents while his willingness to pay for it is one dollar. This kind of consumer surplus is usually found in the case of certain goods which have great utility and which are cheaper. Salt, Newspaper, post card, Match box etc., are some of the examples of such goods.

Marshall’s Statement: Marshall defined this concept of consumer surplus in the following way : “The excess of the price which he would be willing to pay rather than go without the thing, over that which lie actually does pay .. “

Taussig’s Statement : “Consumer Surplus is the difference between potential price and actual price. Potential price is the price which the consumer would have paid rather than go without the commodity”.

The concept of Consumer Surplus may he proved with the help of the Law of Diminishing Marginal Utility. Marginal utility of a commodity decreases when the quantity of it increases. So the consumer pays low price for marginal units of a commodity. The table given below illustrates this fact.

But if he purchases 4 apples at a time, the price of the apples is determined by the marginal utility of the last Apple. That means he pays only 0-40 cents for four apples. On the other hand. if he purchases the apples separately, he would have paid 1 dollar-80 cents. (1 dollar+0-50 cents+0-20 cents+0-10 cents). But the consumer actually pays 0.40 cents for purchasing four apples. Here the consumer surplus is 1 dollar-80 cents – 40 cents= 1 dollar-40 cents. 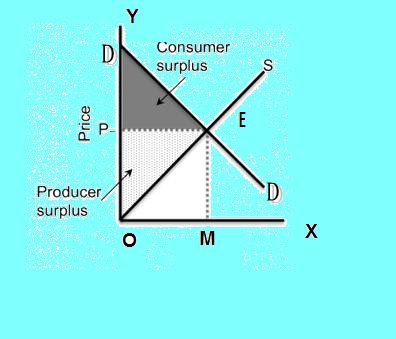 As shown in the diagram, DD is the demand curve for the commodity. When OP is the price, the consumer purchases OM units of the commodity. For this, he pays a price of OPEM. But he derives the total utility of OD from the purchase of this commodity. So he is prepared to pay OMED.

Where, Qe = Quantity demanded at equilibrium, where Supply = Demand

Px = Maximum Price the buyer is willing to pay


If we can remember the formula for area of a triangle, that is fine. The formula is ½ x base x height.

The concept of consumer surplus becomes real only when the following assumptions are fulfilled .

1 ) Tastes and fashions of the consumers remain the same.

3 ) The utility of a commodity depends on its quantity.

4) Each commodity is considered an independent commodity.

6 ) There exists no difference between consumers in their tastes an fashions.

Limitations or Criticism Of Consumer Surplus :

The concept of Consumer Surplus was criticized by several economists.

1. Knowledge of potential prices – not known : The concept of Consumer Surplus indicates the potential prices of the goods purchased by the consumers. But such information can’t he known really. We can’t produce a complete list of prices. Besides what we would have paid is somewhat imaginary.

7. Subjective utility — an unrealistic assumption : Marshall’s concept of Consumer Surplus is based on the assumption that utility is measurable. But utility is a psychological concept. It can only be compared and can’t be measured just like commodities.

In this way, the concept of Consumer Surplus is criticized as hypothetical, imaginary, illusory and unreal.

Although it is difficult to measure exactly the consumer surplus, this concept has great theoretical importance and practical significance.

1. Geographical importance : The concept of consumer surplus helps us to compare the economic conditions of the people living at different places. It emphasizes the fact that people living in cities and towns get more consumer’s surplus than those living in far away and remote areas.

2. Public Finance : This concept has great utility to the Finance Minister. He must know, while proposing fresh taxes, the people’s willingness to pay for a thing and the effect of tax on them after imposition of a tax. He imposes more taxes on a commodity when the consumer’s surplus from it is more.

3. Monopoly value : This concept is useful to a monopolist in the determination of the price of his commodity. It enables him to fix a higher price for commodities having large consumer surplus. The monopolist gets benefits with the knowledge a this concept.

4. International trade: Consumer Surplus  is also useful for measuring the gains accruing from international trade. Generally a country imports those goods which are cheaper when compared to their domestic prices. The manufacture of these goods within the country costs more. So the consumer’s surplus is the difference between the price of imports and price which he would have to pay if produced within the country.

Thus the concept of Consumer Surplus has great theoretical and practical importance. It is a useful tool for the formulation of important economic policies.

The Law of Diminishing Marginal Utility - A Complete Guide