Supply curves are of great importance in the sphere of production. They indicate how the producer supplies commodities at different prices. The producers supply more quantity of commodities at higher prices and lower quantity at lower prices. Supply and price are directly related. The more the price, the more will be the supply. That is why supply curve slopes upwards from left to right. The quantity supplied of a commodity at different prices depend on time. We can make a distinction between short period supply and long period supply.

Short period is the period when a firm can increase its supply by changing its variable factors of production only. When a firm has greater demand for its output and when price is high, it utilizes the fixed factors to their optimum extent and increases the variable factors. This leads to an increase in output. However it can’t rise the output after a particular stage due to the operation of diminishing returns. When diminishing returns arise the average and marginal costs will increase. As a result the firm can’t increase its output. 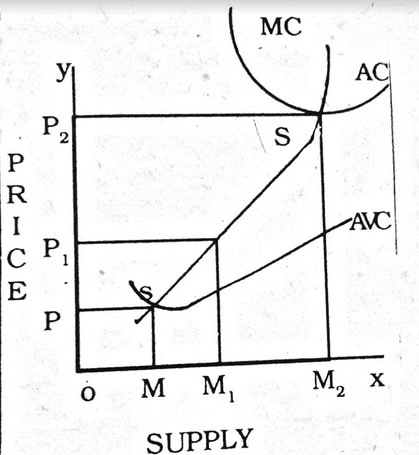 As shown in the diagram quantity supplied of a commodity and price are represented along OX and OY axis respectively. AVC is the Average variable cost curve. MC and AC are the marginal cost and Average cost curves. If price is below OP, there will be no supply. Because the producers will not supply commodities as the price below OP is less than the Average cost. The price existing below OP does not cover even the average variable cost of the firm. So, there will be no supply below OP. When price is OP, the producers are willing to supply OM quantity. Even this price is also not equal to average cost of the firm. However, as this price covers the variable costs, producer agrees to supply OM Quantity of output. When price increases to OP1, the quantity supplied increases to OM1. OM2 quantity of commodity is supplied when price further increases to OP2. So MC curve above OP is the short period supply curve.

Long period is the period during which a firm can adjust its commodity according to the changes in demand. When demand is more, new firms enter into the industry. Old firms will expand their machine and equipment. They construct new factories, employ skilled laborers. They also adopt specialization and rationalization method. As a result the supply of commodity can be increased in the long period. The long period price must be equal to the marginal and average costs. The long period supply curves are of three types. In the first instance the supply curve slopes downwards from left to right. This is due to the influence of increasing returns. The firms secure the economies of large scale production. Its revenue is more than the costs.

In the second stage, the supply curve of the firm slopes parallel to OX axis due to the influence of constant returns. Here the economies and dis-economies tend to be equal. The costs and revenues are equal. In the third stage, the supply curve slopes upwards from left to right. This is due to the influence of diminishing returns. The dis-economies exceed economies. So the costs are greater than the revenue. Thus the long period supply curves may slope upwards or downwards or remain constant. This is shown in the following diagram: 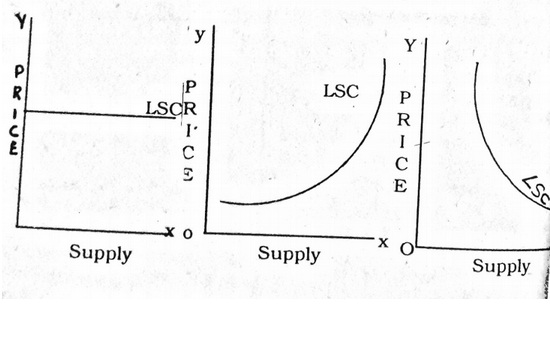 Different Theories Of Interest In Economics