According to the American site The Verge, Microsoft plans to unveil the next major version of Windows on September 30 at an event dedicated to the press. 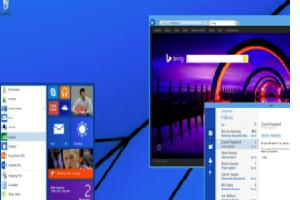 Credible rumors have indicated that the next major version of Windows (codenamed Threshold) could be unveiled in late September or early October. Citing a source at Microsoft, The Verge says specifically that the publisher is planning to organize an event to the press on September 30 to unveil its new product. The American site states that the date of this appointment can still change. It indicates that Microsoft plans to launch for the occasion (or immediately after) a pre-release version of the OS, which could logically be called Windows 9 It is primarily for developers.
A new Windows RT without desktop, could be presented

At the event, Microsoft may consider carrying out a demonstration of the new Start menu, the introduction of which has already been officially announced. According to The Verge, we do not yet know if the voice assistant Cortana will be integrated into the pre-release presented, although it is almost certain that he will be on the menu for the final edition of the Windows 9. it is not clear whether Microsoft will benefit to unveil the official name of its new OS.

Also according to The Verge, the publisher could also announce at the event a new version of Windows for both tablets and smartphones, making a synthesis between Windows RT and Windows Phone. A reconciliation which, as we have long known, is also part of the shipyards Threshold project. According to other sources, this new OS could be limited to the Modern UI screen, and be devoid of desktop screen. What seems rather logical in view of the targeted devices.

Social Finance: A bank "ethical" is it possible? Yes, says the Nave