The ads are linked at a very fast pace in recent days, forcing IFA 2014. Alcatel OneTouch Hero 8 is my today’s discussion. 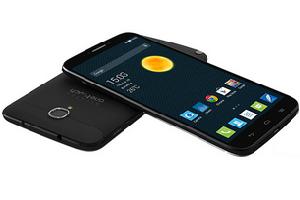 Alcatel is probably quieter than some of its competitors, but that does not stop him to present two very promising new devices: OneTouch and OneTouch Hero 2 Hero 8. terminals are not short of assets to attract.

The OneTouch Hero 2 and features a 6-inch screen capable of displaying a type Full HD 1080p, for a 1920 × 1080 resolution. It is powered by an octo-core processor MT6592 MediaTek coupled with 2GB of RAM. Its storage space is limited to 16 GB, but it is always possible to extend through a port for micro SD cards.

Add to that a sensor 13 million pixels accompanied by a front camera of 5 megapixels. The device runs Android 4.4 KitKat and he can connect to networks like 4G / LTE. With a battery of 3100 mAh to top it off.

Aesthetically speaking, the OneTouch Hero 2 inherits a beautiful aluminum shell. In addition, it will come with a stylus that will hide in the shelter dug into his shell.

The OneTouch Hero 8 obviously very much like her boyfriend, with the same aluminum shell.

Beautiful also features a sensor 5 megapixels and a front camera of 2 megapixels. With a battery of 4060 mAh, the Miracast and the latest version of Android.

Alcatel gave no release date at the moment, and we unfortunately do not know the price of these two beautiful animals. Note finally that these terminals had been raised earlier in the year by the manufacturer.