The vast majority of people believe that obtaining an important position in a job or owning a business makes us leaders since there will be a team working under you. Are we really right? Is it true that leadership is defined by a position? Could it be that by a simple fact of being someone’s boss, you will get respect or trust and get his best effort at work? How much genuine appreciation and genuine respect have you shown for the people who work around you or near your work area?

Having a higher position in the business organization does not make you any leader, people will do what you ask only for your position but never for a true respect or sincere appreciation. To earn your respect you will have to start by winning your permission. Possibly one of the members of your new or old team, who does not hold a position, is actually the true leader of the group. Maybe he is a leader by influence while your leadership is based only on your position. What did he do to gain such influence, respect, admiration so that other people will decide to follow him? Do people follow you? Does your team really want to collaborate with you?

What is the real work done by the leaders to positively impact the lives of other people?

Personal Developments: Leaders become responsible for the lives of his followers, they eliminate complaints and problems. They understand the responsibility and consequences of their actions. They use failures as a base for strengths and grow. They observe problems as challenges, continually read personal development techniques, find a new opportunity to grow and develop every day. Because they know that to develop other people, they must first work on their personal development.

Integrity: Leaders are complete people. Therefore, they always act on the basis of principles such as honesty, respect, integrity, dignity, justice, excellence, service, love and loyalty. They always keep their word and are congruent between what they say they are going to do and what they do. They become a positive example and worthy of imitation for all the people around them. Imagine a person who is a leader by position, who is married but romantically involved with another person at workplace. How will his/her subordinates react to the organization chart? Will they trust him? Of course not, because he is a disloyal and dishonest person.

Genuine interest: Leaders show a real interest in the people around them. They learn to listen to them, find out what their concerns and desires are, discover their talents, learn to believe in others and look for the opportune moment to promote them and highlight the positive qualities of each one of the people that surround them. They praise in a sincere way so that other people feel appreciated but never flatter.

Have you worked on each of the points listed above to win the permission of the people? Do people want to be with you? It will be worthwhile to rethink your life based on each of these points, if you really want others to follow you.

How to become a Good SME Leader

6 Lessons of Leadership Nelson Mandela left to the World 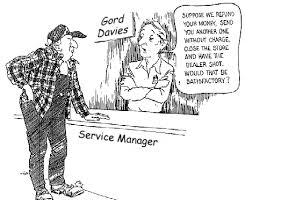