Matchstick: the dongle streaming Firefox OS and its small success. More than 8,000 units have been ordered via crowdfunding.There are some days we were talking about the Matchstick, a dongle streaming (similar to Chromecast) developed by a company of the same name and uses the Mozilla Firefox OS operating system. 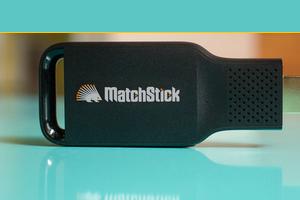 Currently, the Kickstarter campaign to launch the product on the market is open and we can already say that the idea of ​​a dongle streaming Firefox OS is more “open-source” than that of Google Chromecast .

As part of the campaign, a dongle is offered at $ 18 (the Developers Kit costs $ 25). And while there is still 22 days before the due date thereof, over 8,000 units have already been ordered on the platform (within 10 days).

Early in the campaign, Matchstick raised at least $ 100 000. But by the time of this writing, more than triple of that amount has already been raised. The future looks bright for the dongle streaming.

Recall  that Microsoft has launched the HD-10 and a dongle for streaming recently. Both stand as competitors for the Chromecast of Google. But both use the Miracast technology. The difference? They mainly do screen mirroring.

Nine months after more than four-times its funding goal,  Matchstick has announced that it has cancelled the Firefox OS-based HDMI dongle which was sold for $25, designed to compete with the  Google Chromecast. However, buyers will get a full refund.

Almost Every Car Will Be a Connected Car Soon!