The Blackberry Classic is one of two new smartphones announced by John Chen in June. Its launch is scheduled for the end of the year, in November. In the meantime, here are some pictures that might relieve the most impatient. 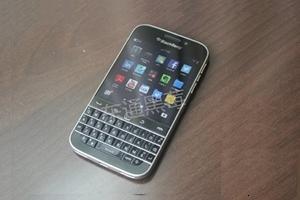 BlackBerry has  expected to announce new smartphones at the end of the month and, more specifically, on September 24. The event is important for all fans of the firm. Because they did not have much time to put teeth in the past 12 months and, in addition, John Chen promised the return of the physical keyboard. Two models will be presented: the promising Passport and a new Blackberry Porsche Design p’9981. The least surprising Classic could also pop in, although its commercial launch is expected in the month of November.

The BlackBerry Classic obviously not denotes further since the first one is having the keyboard and a navigation buttons on the other. All are in a somewhat larger size due to the size of its screen: 3.5 inches normally. Obviously, it is far from the luxurious Porsche Design. Logically, they are  not the same.

As its name suggests, the Classics will be  classic, both in appearance and in technical since we expect a Snapdragon S4 (generation 2012) processor supported by 2GB of RAM anyway. The display should not exceed HD resolution. Confirmation of  the official announcement about Blackberry Porsche Design p’9981 & Blackberry Classic will hopefully be done at the end of the month.

Huawei will present its first SmartWatch in 2015