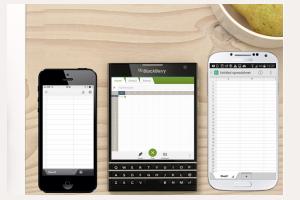 This is really a Strange day for BlackBerry. On one hand, the company has just announced its new quarterly results as always with losses (even if they are lower than the forecast). And on the other hand, the release of BlackBerry Passport, the new smartphone of the manufacturer which seems to have a good reception by the public (at least in the United States).

Remember, it was 24 September, Wednesday when BlackBerry has officially launched the Passport (it had been gradually introduced on the blog of the company) and now  we came to know that the BlackBerry Passport came out of the stock, just hours after its launch.

According to CEO John Chen, BlackBerry Passport has already been more than 200 000 orders since Wednesday. And also, it came out of stock in six hours at the site of BlackBerry and ten o’clock at Amazon.com.

In essence, it is good time for the BlackBerry Passport. But a question as it is still unclear to us whether the touchscreen of BlackBerry would be able  to escape the hacking!

In any case, we see a small shift within the firm’s paradigm . It was not a long ago when it tried to show its excellence by challenging Apple and Android devices with devices like the BlackBerry Z10.

But this time, the BlackBerry Passport seems frankly to be a prime revenue source to its “corporate” niche. Since the Passport was developed , BlackBerry has hardly raised its advantages in terms of productivity in its blog posts.

“We do not necessarily have what it takes to fight Apple and Samsung. Hence we need to focus on the world of professional said David Derrida, the product manager of the company in France”

Castle Wear for Android Wear: an accessible RPG even on round watches