Video ads tend to generalize on free web services. After Facebook, Twitter and Flipboard, it’s time for Spotify to embark on the adventure. Spotify video ads arrives soon! So Wait a few days! 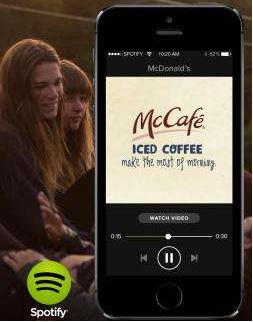 The music streaming service has announced two new advertising products that will allow advertisers to show video ads on the screens of non-paying users of the service.

If the first screen (only on computer) is more or less similar to the audio, the second format seems more interesting as the users are already familiar Spotify video ads.

Indeed, thanks to this new product, the user can “choose” to watch a video advertising in exchange for 30 minutes of uninterrupted listening. Spotify called it a sponsored (by the seller) session. It seems that this is also a way to ensure that the user will (theoretically) see a pub and not just listen. The “opt-in” method could also be beneficial for the advertiser who will be benefited from the attention of targets audience.

For now, only a few advertisers including Ford, Coca-Cola and McDonald’s are taking advantage of these new Spotify video ads formats.

Spotify video ads does not appear in France, the United States, Germany, Spain, the UK and Sweden. But the service are likely to be  deployed in other countries in 2015 in this new format .

Spotify video ads will be served with an audience of 30 million :

Spotify has about 30 million free users.For those who do not use Spotify, remember that this streaming ad service has adopted two different models which are classified in two types of users: free users who enjoy the service through advertising and premium users who pay a monthly subscription.

Of course, it might be ideal to convert Spotify premium users  to free users. But for those who are not interested in the paid model, Spotify does not seem to have any difficulties in terms of monetization.

Currently, Spotify has no less than 30 million free users who listen an average of 146 minutes of music (and ads) per day. Premium subscribers numbered 10 million in May, 2014.