The # Ice Bucket Challenge is currently on everyone’s lips and in all the newsfeeds. Also, Samsung has come up with its flagship S5–something.

Even the Galaxy S5 Samsung joins in the #Ice Bucket Challenge display
Also, the S5 can douse

The # Ice Bucket Challenge is such a thing for themselves. On the one hand it is a great example of how viral content can work. In addition the good cause, namely attention for ALS (Amyotrophic Lateral Sclerosis), a nerve disease to create, and collect donations. On the other hand, one has but sadly also felt that about anyone who has ever kept his face from a camera, participates in the action and they may also abused for its PR. That would be a shame – but that’s how business works now times today.

Sympathetic to watch as the eighteenth D–celebrity in how he can douse with cold water, to read his name again in the tabloids, there is the Ice–Bucket–action from Samsung. Take a Galaxy S5 (known to temporarily waterproof with IP67 degree of protection), a bit of ice water and a YouTube channel. Out then comes a overmold with ice water S5 with “frierendem” S–Voice Assistant.

Apple, HTC and Nokia are now on the train 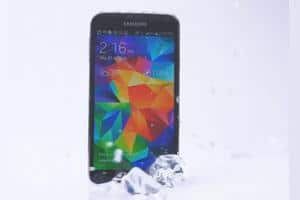 Unfortunately, one could also say that Samsung abused the whole issue and the current attention for their own PR purposes here. In the case, however, it is at least a creative idea. Nominated by the way has the S5 iPhone 5s from Apple, the M8 One of HTC and the Lumia 930 from Nokia.

The ulterior motive is clear: iPhone 5s and Lumia 930 are not waterproof, the One M8 at least not officially. In the video‘s happy to present times, but imitation is probably not recommended. Well, it depends on Apple, Nokia and HTC: Make it with? And if so, how? Anyway PR creativity is now required.

Otherwise: attention for ALS is great, as are the many donations that have now come together. Should only exaggerate the action is not, as might fail the currently still positive attention sometime with the people in annoyance to – and that would defeat the purpose.