Sony also unveiled its new generation of Smartlens (300 euros), these accessories that can take better pictures with a smartphone.

The Sony QX30 is for Optical Zoom lovers since this accessory equipped with a sensor of 20 megapixels, has a stabilized zoom X30. The accessory is also compatible with iOS and Android. 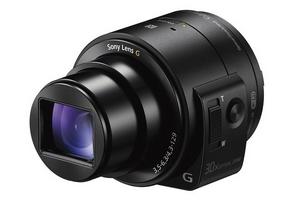 As for QX1, its purpose seems to be to turn the smartphone user in Reflex camera. Among the specifications announced by Sony include the BIONZ processor X, 20.1 megapixel sensor as well as “worthy settings of a reflex.” This accessory also allows capturing images in RAW.

Finally, Sony also unveiled a small camera called Action Cam Mini (maybe a competitor for the GoPro) that weighs only 63g but can shoot in Full HD and broadcast images live on Ustream. The small high-tech camera from Sony comes with a watch steering.

Sony QX30 has achieved an outstanding notice in IFA 2014. Some professional photographers really praised it a lot for its clear pictures. I wish all the best for this new camera.

Microsoft HD 10: can it compete with the Google Chromecast ?